Ruthanne Fuller, Ward 7 City Councilor At-Large, made it official today, formally kicking off her campaign for Mayor of Newton on Sunday afternoon.

Fuller made the announcement at the Scandinavian Living Center in Newton. Speaking to a capacity of crowd of more than 150 people, including family, friends, elected officials and campaign supporters, Fuller told the audience, “I’m running for Mayor of Newton because I love this city and I believe we are facing critical decisions that will have an impact on Newton for decades to come.” Fuller added, “I am confident with my management experience and financial acumen; I am the right person at this important time to lead Newton into the future.”

Fuller was introduced by the former President of the Newton Board of Aldermen, Brooke Lipsett who said of her former colleague, “Ruthanne not only has a deep understanding of the city’s finances, she is one of the most collaborative leaders I’ve ever had the privilege of working with. She also embodies the values that Newton stands for, like tolerance, inclusion and compassion.”

Fuller successfully ran for Alderman at large in 2009. Since then, she’s assumed a leadership role when it comes to the city finances, spotlighting a billion dollar shortfall the city owes retirees. As Councilor, Fuller has also developed a strategic investment plan for the city’s water and sewer systems and helped rebuild three of the city’s elementary schools. 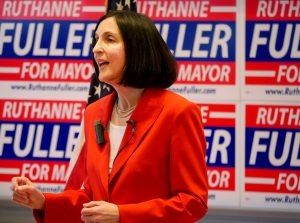 Prior to her official kick off, Fuller has held a series of meet and greets throughout Newton, outlining her specific vision for the future of the City, focusing on everything from the need for more affordable housing for seniors to creating a master plan for Newton’s residential and commercial corridors.

“We need to take charge of our villages and neighborhoods by mapping out what we want our city to look like in the future,” Fuller added. “And we need to recommit to our core values that Newton is a city where everyone has a voice, and that this city works for everyone.”

At Sunday’s event, Fuller talked about the overwhelmingly positive response she’s received from Newton residents since she first began planning a run for Mayor.

“These are unprecedented times,” Fuller told the audience. “A new administration in Washington, with different priorities will mean that a bigger burden will fall on our states and in turn, on cities like Newton.” Fuller closed by telling the crowd, “this is a rare moment in history and getting involved locally in Newton isn’t just the right or smart thing to do. It’s something we must do.”

Fuller, who settled in Newton nearly twenty five years ago with her husband, Joe and her three sons, grew up in Detroit before moving east to attend Brown University and Harvard Business School. Prior to getting involved in local politics, Fuller was a management consultant for Fortune 500 companies. Later, she shifted to the non- profit world as a strategic planner. Fuller developed the first master plan for WGBH.

If elected, Fuller would be Newton’s first woman to serve as mayor.  The symbolism wasn’t lost on her. “When I was first elected, I served as Alderman. These days, we’re called City Councilors. I call that progress.”