Ruthanne Schwartz Fuller, a city councilor-at-large running for Mayor of Newton, was the first candidate to hand in the signatures required to qualify for the ballot in this fall’s election for Mayor of Newton.  Fuller’s campaign submitted over 900 signatures, more than double the 400 required, just hours after nomination papers became available Monday morning.

The volunteer effort behind Fuller’s one-day signature drive is being considered one of the largest in Newton city elections in recent memory. 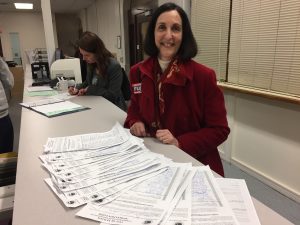 Fuller said, “I’m proud of the strong, grassroots campaign we’re running across each of Newton’s 13 villages.  Every day, I’m going door-to-door and listening to residents talk about the issues that matter to them — supporting our public schools, fixing our streets and sidewalks, preserving the character of our neighborhoods, and ensuring local government is transparent and fiscally responsible. As Mayor, I will bring my decades of experience working with businesses and non-profits to City Hall to ensure that Newton is a safe, livable, and sustainable community with a clear plan and vision for the future.”